The future of Sarah Palin?

IN A GRACIOUS, CLASSY and very heartfelt concession speech last night, John McCain seemed to suggest that his time was over and that Sarah Palin’s had just begun. While it was kind of him to talk up his running mate whose ambitions he knew he had to affirm somehow, I don’t agree with him. I think the opposite is the case.

I have always known that some day the Republican Party as we know it would bring about its own destruction. Implode in a large cloud of dust like the demolition of the giant Montgomery Wards building in Saint Paul. It was only a matter of the right conditions. That awareness dates to 1995 when a moderate Republican friend of mine in Dubuque, Iowa, said to me: “I want my Party back.” What she meant, of course, is that she had been marginalized by extreme, doctrinaire, right wing religious fanatics who had taken full control of the Dubuque County Republican Party apparatus. They became a party of only a few very narrow issues. Of course, fiscal responsibility wasn’t one of them. This phenomenon occurred in Iowa before most other places in the United States. I was starkly aware of it because I was battling the same extremism as a candidate for the local school board. In those days the fanatics imagined they could take control of government by first electing their people to school boards — in Iowa separate elections to which very few people paid attention. Once elected to the school board their people could matriculate upward to higher office — city council, state legislature, Congress and, well, who knows. 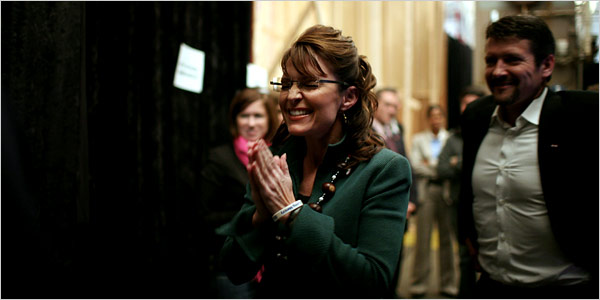 Sarah Palin - the future of the Republican Party?

IT WAS A CHILLING notion but one we in Iowa quickly discovered was a largely overblown concern. Yes they could quietly get some of their folks elected by mobilizing church members through “stealth” campaigns. We would wake up one morning and find ourselves represented by people who didn’t believe in public education. People who were home schooling their kids. In Dubuque, where two of seven school board members were of this ilk, they would take the reins of power over a $60 million a year enterprise. In other Iowa cities, Davenport, and I can’t remember where else, the products of this sinister strategy were popping up.

But their plan didn’t work for very long simply because the people they got elected couldn’t be cool. They started ranting and raving on all manner of issues, alienating virtually everybody. Eventually the electorate got sick of them and kicked them out. This gave me some confidence that right wing crazies couldn’t take over our government. Turned out I was right and wrong and maybe now right again. They did manage to capture the highest office in the United States and from there proceeded down a path so destructive that hundreds of thousands of people were maimed or killed, hundreds of thousands more pushed out of jobs, public debt in the stratosphere and, in a final flourish, managing to bring the American economy to its knees. It took all of that and a very smart guy who may be our next FDR to finally get the American people’s attention.

We might ask now, wither the Republican Party? I suggest they go to my disillusioned friend in Dubuque and ask her what it will take to get her back. I think she might say that all of the single-issue crazies have to go. That the Republican Party has to reach out and find those soccer moms they’ve pushed aside for failing the wacko litmus test and convince them they have a future as a Republican.

So I submit that it is not Sarah Palin who has a future with the Republicans because if she does, there probably won’t be a Republican Party pretty soon. John McCain, at his core is a pragmatic moderate, is the future of the Republicans. But I’m not optimistic anyone will see that. To be truthful, I don’t care a whole lot because I believe that after eight years of hell the right people are finally in charge.

This entry was posted on Wednesday, November 5th, 2008 at 8:24 pm and is filed under Grumbles. You can follow any comments to this entry through the RSS 2.0 feed. You can leave a comment, or trackback from your own site.