WHEN I VISIT MY SISTER who lives in Canada or talk with friends who live in the UK or New Zealand there is one thing they all can take for granted: What they’re going to do if they get sick. But for all of us in the United States we either have a job that offers affordable health insurance or we don’t. And if the latter, we are uninsured. There are 47 million people out there in this circumstance. I know some of them. You do too. And I worry that at some time in the future either I or my children will be among them.

Read the blog entry AND see the myriad comments

I have never understood why Americans are so ambivalent about something so basic to life in a modern civilized society — access to affordable, comprehensive, healthcare. But I wonder whether it is “The American People” in general behind this problem or special interests and a Congress that has so long accepted their contributions to maintain the status quo.

When health insurance was invented easily within the lifetime of a Baby Boomer, it was a set of schemes created by physicians and hospitals to ensure they were paid for services rendered. Medicare came along and provided another way for providers to get paid. Then we saw a vast explosion in the healthcare industry. Hospitals grew and became more sophisticated. Quality of care improved. Physicians at last had good incomes and could take vacations. The cost of this more sophisticated healthcare increased so rapidly that people who once paid for doctors visits with chickens and a bushel of produce found themselves locked out of the system altogether.

Then an outfit called Kaiser Permanente in California showed it was possible to create a highly integrated system of doctors, hospitals and clinics, charge people to keep them healthy, and make money at it in the bargain. The Nixon Whitehouse became enamored with it and soon there was legislation that created a place for United Health, Aetna, and dozens of other companies to make money taking care of sick people. Serious, serious money. In no time at all they joined the drug companies as the most powerful lobby of all time. In the succeeding years the objective of the entire system shifted from taking care of sick people to making money for rich people.

Americans seem, again, to be calling for reform in the healthcare system. The major Democratic candidates began issuing policy statements and publishing their reform plans on their websites. They are fairly similar to each other so it is not really a question of which candidate has the better idea. The question is, which candidate has the best chance of getting his or her idea passed into law. That person, in this writer’s estimation, is Sen. Hillary Clinton.

For weeks and weeks now the people in this household — four Minnesota Democratic caucus participants — have been sitting on the fence with regard to Barack Obama and Hillary Clinton. Sen. Obama certainly is an exciting candidate. I can push a button on my computer right now and listen to then Illinois state lawmaker Obama deliver his outstanding speech to the Democratic National Convention in 2004. He is a skillful politician and orator and could make a very exciting President I think.

Sen. Clinton, on the other hand, has been working away in the cloakrooms and corridors of Congress getting real legislation made into law. She has worked hard. She has been effective and she is highly regarded by her constituents in the state of New York. When it comes down to hard tack politics, I believe Hillary Clinton can best use the bully pulpit of the Presidency to advance a progressive agenda. And after all of the shouting and speechifying is done, that’s what it’s all about, isn’t it? Getting things done?

FOR ME THE HEALTHCARE CRISIS IS EMBLEMATIC of a much larger problem in this country. There seems to be a fundamental inability of government to recognize the plight of its citizens and to take action on their behalf. Barack Obama has not had an opportunity to show me what he can do. Hillary Clinton has. This government faces a host of intractable problems, many of them created by the malevolent and incompetent Bush administration. The Iraq war isn’t going away anytime soon. The “War on Terrorism” isn’t going to be resolved no matter how good any President might be. However a determined and skilled chief executive can certainly get something done about the state of our healthcare system. There are no forces external to the United States at work. It is not money standing in the way (we pay far more per capita for healthcare than Canada or the UK). Only politics. 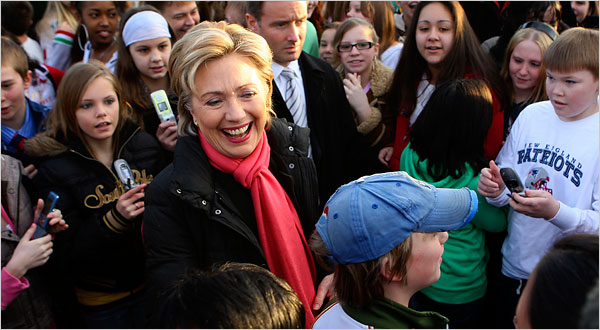 In Hillary Clinton we have someone who is, very much in her own right, a master politician. She compromises in ways that Progressives do not like. She manages to get laws passed that Republicans do not like. She shoots down the middle keeping in mind her duty to the poorest and most vulnerable among us. If Barack Obama manages to get to the Whitehouse he will have to move to the center as well, and compromise and accommodate. If I have learned anything about elected office I know this: campaigning for office is one thing; governing is another. The moment you take your hand off that Bible you have constituents who voted for you and constituents who didn’t. Let the compromising begin. I want someone who can get the best deal for the American people — especially those most vulnerable among them — and I believe that person is Sen. Hillary Rodham Clinton.

P.S. What do you think? Share your thoughts right here. If you’ve not commented before, you will automatically be asked to register. It takes just a few seconds and you only have to do it once. Then you will be e-mailed a password and you’re off and running. You can even add your own posts if you wish.

This entry was posted on Wednesday, January 30th, 2008 at 4:09 pm and is filed under Political Endorsements. You can follow any comments to this entry through the RSS 2.0 feed. You can leave a comment, or trackback from your own site.