APRIL 1, 2006 — I CAN ONLY SPEAK FOR MYSELF. TRAINS ARE SPECIAL. They been featured at various places throughout my life and sometimes long stretches in between. When I take the train I connect these dots and the memories that go with them. Yesterday I disembarked from a train — Amtrak’s westbound Train number 7 — as it was just getting warmed up for the long climb across the Rocky Mountain west on its way to Seattle.  I was returning from Milwaukee. The merest distance for the Empire Builder. When the attendants are still fresh. Still to be found. Having a more ready smile. Looking crisp. Talkative. Going east TO Milwaukee, which is only 80 miles from the terminus of eastbound Train 8, the smiles are shopworn from sleep deprivation. A warm, cozy bed, that does not rumble. The sound of the train whistle, distant. Not just a dozen yards forward of their dormitory car. 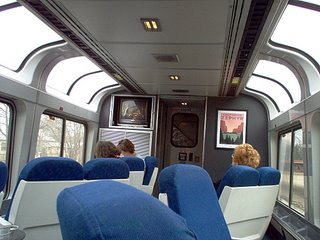 WE CLIMB ONTO the Reading line train in Norristown, Pennsylvania. The end of electrified service. Beyond this point a diesel engine is backed up for the trip to Reading with so few passengers on board it would be cheaper to buy each of them a new VW Beetle than continue running the service. Three little kids. Holding onto their mother’s hand. Riding the train to Philadelphia. The Reading Terminal. Built over of the storied Reading Terminal Market because the farmers were there first. We are going to Wannamaker’s to hear John Facenda narrate the annual Christmas show in the great hall in the middle of the store’s first floor. We are so tiny we are dwarfed by the jewelry display case let alone the high ceiling and booming voice of WCAU TV’s news anchor. The annual trip to The Big City. Riding the remnants of a once great passenger rail system. A tree trimmed to the very base of its branches. 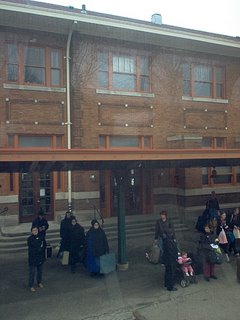 WE ARRIVE AT THE TRAIN platform in Havre. Our newborn daughter in our arms. To meet the train. Train Number 7. Lumbering into the station on time. Ready for a break; refueling; and take on water.An aging couple steps out of the new two story tall sleeper car. The biggest smiles on their faces that I have ever seen. They are here to lay their eyes upon their first grandchild. Oh they have waited too long for this day. To see the beginning of the next generation. As I write this I see them walking toward me. Waving. My mother’s arms outstretched. I can play this image back in full color. Slow motion. Fast motion. Reverse. I have never seen my mother so happy. I have never seen my father so happy 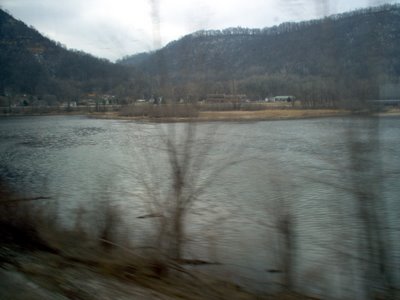 THERE AREN’T A WHOLE LOT OF PLACES you can go on a train in these United States. In the UK maybe no one would write nostalgically about their trips on the train. Just as I do not write nostalgically about my trips on airplanes. They are just too numerous to connect to anything. Oh, there is drama from time to time. Racing back east to see a dying relative. Heading to the west coast to see a friend marry, now his sons are grown. But these times are drown out by the tedium of trip, after trip, after trip to do things I can barely remember. In my life, the train goes places I cannot go any other way and brings memories I will always carry with me. The land washes dreamily by at, what, 65 miles an hour? I think about all of the things I will accomplish during this quiet trip. Beautiful scenery slipping by. My laptop hums but I keep looking up. What do I see out there in the dark waters of the Mississippi River?

I AM SITTING IN THE DINING CAR talking with a young man who is traveling from Miami to Seattle via Amtrak. I look around for the videographers documenting this great journey which he tells me will take five days. Over 3,000 miles. But there are none. He is quiet. Understated. Afraid to fly because of a freak inner ear condition that kept him down for three months. The doctor says now it is safe but he prefers not to chance another airtrip just yet. An older couple is seated across from us, on their way to the Twin Cities to celebrate their son’s engagement. She orders chicken but quickly asks the server to box it up because it is too much and she has so recently had a meal. Her spouse finishes off his steak. He looks across at my temporary associate and advises enjoying his health. €œGetting old your body begins to give out,€ he says just before pulling his cane from behind him and slowly lifting himself out of his seat for the short trek back to the Coach car. My dining partner declines the rich dessert but chooses to sit patiently while I enjoy mine. He is in no hurry. Neither am I and eat the dessert so slowly that the server has to gently encourage us to depart so that she can bring in the 7 p.m. seating. After six hours, with night all around us, we pass through downtown St. Paul and slowly drift into Midway Station. I cannot believe the time has passed by so quickly.

THE TRAIN CROSSES INTO OUR LIVES. It recedes, beat back by noisy archaic modern conveyances. The trolley tracks disappearing in favor of fume belching GM buses. And then, as though someone has had a capital new idea, the tracks return. Light rail they call it, not trolleys. And build new tracks in the exact same place as the old ones 50 years before. Another great new idea: Commuter rail from the northeastern suburbs to downtown Minneapolis. Virtually the same as the one I rode with my siblings and mother in 1959. I am reminded by a business associate that after Sept. 11 the only practical public conveyance for a surprisingly long time was the inter-city passenger train. With the ozone hole repairing itself in the absence of jet contrails and the sky around my house deafeningly silent with activity at the airport halted, trains step into the breach as they have done in my private life so, so few very important times. 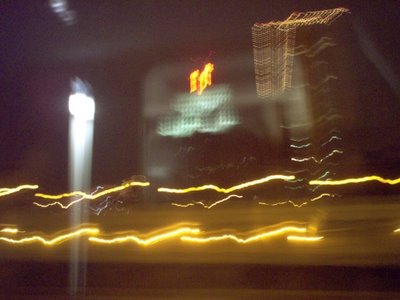 This entry was posted on Sunday, April 16th, 2006 at 2:47 pm and is filed under ESSAY. You can follow any comments to this entry through the RSS 2.0 feed. You can leave a comment, or trackback from your own site.