The word from New Orleans 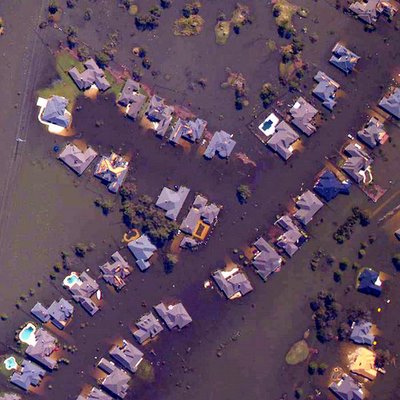 Flooding in a neighborhood in New Orleans

Thanks for your messages. Sorry to be so slow getting back to you.

Sometimes I feel like I’m at the helm of a rudderless boat caught in a whirlpool.
Speaking of the legal system shutting down, tomorrow will be the 1st time I will have a chance to get into my office since the storm. Despite repeated efforts on my part, I have been unable to get any word from my landlord about the condition of my office. From standing on the levee yesterday I saw that the construction crew was using my space to bring out plywood to close window gaps on other floors. Their efforts may have done more harm than the storm. For over two weeks I have had no access to my files, computer data and calendar. I cannot reach my clients and they cannot reach me. The last couple evenings we have had internet access at Mary’s sister’s house in Madisonville, north of Lake Pontchartrain. Before that we had to use the public library in Gulf Shores, Al. Hopefully tomorrow Shelly will get us DSL service in Gulf Shores. We have been getting by on cell phone service and even that did not work for the 1st few days and has been overloaded since then.

It is possible we will have power restored by Friday to our home in Metairie. As great as it will be to get back into our bed, it will be heartbreaking. Our house is on a raised slab and did not flood. All of our neighbors flooded. Many have one story homes and thus lost even their bedroom. Our only flooding was a foot of water in our cabana and water in Shelly’s car. She doesn’t mind because she would like to take the insurance money and apply it to a new car.
Julie was able to transfer for at least one semester to St. Louis Univ. She has been gone 10 days already. Shelly is postponing graduate school for one year and looking for a job in D.C. She and a classmate have already lined up an apartment. Since the rebuilding of New Orleans will take years, and success is hardly preordained, I hope they both seek opportunities elsewhere. It will take the equivalent of the Marshall plan to get this region on its feet again and I doubt that our government will have the resolve to see it through. The workers and customers are all gone and many have no homes to return to; the businesses are shut down with heavy damage; and, the cleanup necessary for any commerce or repopulation to occur will take many months. What a gargantuan task!

[NOTE: See €œcomments€ for a copy of an article from the NYT on the collapse of the legal system in New Orleans]

This entry was posted on Wednesday, September 14th, 2005 at 7:21 pm and is filed under New Orleans. You can follow any comments to this entry through the RSS 2.0 feed. You can leave a comment, or trackback from your own site.